Dahon was founded in 1982 on a vision of “green” mobility, a form of transportation that not only serves to keep people healthier, but also preserves the environment for the next generation. As a relentless innovator, Dr. Hon toiled in his garage for seven years to create the perfect folding bicycle that would uphold these ideals. After presenting his invention to several established but uninterested companies, Dr. Hon and his brother Henry decided establish their own company from scratch. The two gathered venture funding and established their headquarters in Southern California while Dr. Hon went to Taiwan to build Dahon's first factory. Two years later, in 1984, Dahon folding bicycles were rolling off the assembly line as the most compact folding bicycle on the market at that time. Under the continued leadership of Dr. Hon, now recognized as the father of the modern folding bike, Dahon and its team of 70 engineers continue to set the pace with new technologies and innovations.

Primary production takes place in the company’s main factory in Shenzhen, China. Another facility, near Beijing, produces Dahon bikes for the Chinese market, which continues to grow strongly for the U.S.-based company. Beginning in 2012, all Dahon brand bikes destined for Europe will be made in Bulgaria. In a strategic partnership with Maxcom Ltd., the company is setting up a full-scale production base at one of the most modern facilities on the continent. All of the bikes for the European market will be made at the ISO 9001:2008-certified facility in Plovdiv, which specializes in the manufacturing of bicycles and features state-of-the-art machining technology and modern quality inspection equipment.

For 2012 Dahon offers 28 models of folding or portable bicycles in wheel sizes ranging from 16-26” with aluminum alloy or steel frames. Most of the 2012 offerings are true folding bicycles with some, like the Tarazed mountain bike, using Dahon "Flat Pak" technology. One of the company's best selling bikes is the Boardwalk D7, an entry-level, steel-frame commuter bike.

In 2008 to celebrate 25 years of production Dahon produced a special edition based on the Mµ series of bikes - the Mµ XXV. 250 of these machines were produced. In March 2009 they announced that they would produce 1,000 sets of a special edition bike based on its Curve D3 folding bike with the Spanish design firm Kukuxumusu. 2012 marks the company's 30th anniversary and Dahon have produced 300 limited edition bikes to honor the occasion, along with 3,000 more affordable replicas.

Dahon received an Innovative Products Award each for a folding bike entry and a suspension postpump, which combined an air suspension system and bicycle pump inside a single seatpost, at the 2009 Taipei International Cycle Show. In September 2009, Dahon's Ios XL, a bike designed for the urban commuter, was awarded a Eurobike Gold Design Award. Only 77 entries out of a total of 400 applicants from the bicycle industry worldwide were awarded with Eurobike Awards in 2009, and out of those only eight received a Gold Award for outstanding achievements in design and innovation. Other awards include a 2005 Eurobike award the Ciao! mini bike, a 2006 Eurobike award for the Glide P7/P8, 2006 Fiets RAI Dutch Bi 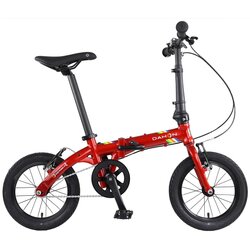 It's a folding kid's bike. Stick it in your pocket and walk with your child to the park for a ride..... 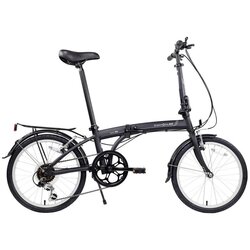 The epitome of versatility and value, the SUV D6 has compact wheels and a folding frame that stores in seconds. This stable bike is great for maneuvering through taxis, along the boardwalk or storing in a camper. It’s a gateway to get out and play. 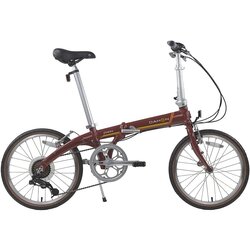 . Riding on a bike to work is definitely a favorite option of transportation for many people nowadays, but this kind of journeys are generally minimal in distance, as suitable storage in office buildings usually are very rare. This can cause heartache for the fear of losing a person’s favorite companion on the road. Foldable bike is often a answer to this problem. When many of us can’t get on the trains with our complete size bikes, why don’t you acquire something more compact or maybe better still, a new folding bike that could decrease the size by half. The following bike that may be recommended in order to suit your purposes: The Dahon Piazza D7. The Piazza D7 is a genuine treasure in terms of its benefit as well as performance, turning it into a strong favorite in the Dahon collection. Hand welded as well as a fast-shifting Neos derailleur with seven gears, this bike is usually a ideal companion regarding urban riding. What is great about Dahon Piazza D7 is that this type of a folding bike is easy to use. Keep in mind that it will not take you too long to figure out how to fold and unfold the Dahon Piazza D7 folding bike. It’s fair to say that the bike has been designed to make folding and unfolding process simple. So, it will take you less than 1 minute to fold and unfold the Dahon Piazza D7 bike when such a need arises. And of course, all of this means that you’ll find it easy to travel with the folding bike. You’ll find it comfortable to ride the bike around the city and in rural areas. With such a bike as Dahon Piazza D7, you’ll be able to go up the hill and go down the curb easily. Actually, the bike makes it possible to overcome different types of obstacles on your way. You can also ride the bike in beach parks and in large city parks. Some people choose to use the Dahon Piazza D7 folding bike during car camping trips. It’s important to note that the folding bike comes with many great features and has everything that you need to enjoy a comfortable ride. As it was mentioned earlier, the Dahon Piazza D7 is a high-quality folding bike. That means that you’ll be able to successfully use this type of a folding bike on a daily basis. Without a doubt, the bike will serve you very well Dahon Piazza D7 frame is welded by hand from custom made Dalloy Sonus aluminum tube set and combines half a dozen different copyrighted technological aspects. This bike has the Dahon Neos backed derailleur, a stunning brand-new design that features an ultra short cage to enhance ground clearance while improving shifting. The most beneficial component around the Dahon Piazza D7 would be the sensitive Neos shifter. These seven gear provides wide range of variety, in fact it is a piece of cake to shift the gear utilizing a twist-gear shifter. It can cope with almost any slope or hill in the everyday riding. 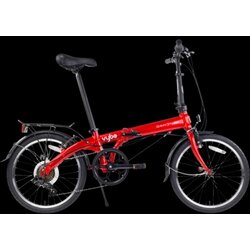 . Our lightweight aluminum Vybe D7 gets you moving’ with a fun retro design and seven speeds of versatility. This groovy folding bike promises convenience and true riding comfort, with all the compact folding features that today’s busy people have come to expect. 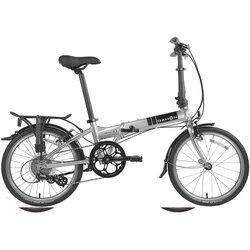 A frequent winner of folding bike shootouts that include bikes that cost up to four times as much, the Mariner D8 is one of our most popular bicycles. It’s a high quality, lightweight bike at a surprisingly affordable price. Its portability makes the Mariner D8 ideal for trips that include a stretch by bus or train – perfect for multi-modal urban transport. From the leading manufacturer of folding bikes, the eight-speed Dahon Mariner D8 offers the features and performance most commuter cyclists may want in a folding model, all in a practical, affordable package. First, the Mariner D8 is comfortable to ride, going smoothly over bumps and shifting fluidly up and down hills. Second, it folds and unfolds quickly, and it latches securely into both modes. Its design also addresses practical concerns: The Mariner D8 has fenders to thwart rainy-road splashes onto clothing, a rear rack to carry stuff, and the option for a frame-mounted front bag. Finally, this bike is a good value. As with full-size bikes, with folding models you generally get what you pay for. But priced at around $870, the Mariner D8 is a good-quality folding bike with the features you need. 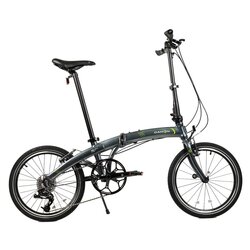 Equipped with a generous selection of gears, this folder was designed for RVers and urban commuters who ride hilly, uneven terrain. Ride it, collapse it, and carry it with you. Stores in an RV compartment, by a desk, or in a closet. The MU D11 takes less than 60 seconds to fold up. The MU D11 folder is perfect for riding around town and up and down hills. An 11-speed gear system lets you ride faster and makes it easier to pedal up hills than lesser-geared Dahon folders. Additionally, the long, slightly curved frame provides a smooth ride with little vibration on flat, paved city streets. The frame is constructed of Dalloy aluminum, which is stronger than standard aluminum, yet lightweight and easy to carry. A quick-release, ViseGrip latch on the frame and handlebar post hinges keep the frame locked tight and ensure the bike won't collapse while you're riding. For extra security there is a DoubleLok knob that pivots over each latch to keep it closed.
Page 1 of 1