The History of Pinarello

GIOVANNI PINARELLO, the eighth of twelve brothers, was born in Catena di Villorba in 1922. He was born at a time when life could be rather difficult, which was not uncommon, for many families ot the humble, and peasant backgrounds, in the rural farming areas of Veneto. The struggles of a simple farming life, as well as surviving the hardships of both World Wars, greatly effected and influenced the life of Giovanni Pinarello and his family. His impoverished and simple upbringing was not able to extinguish a passion Giovanni discovered he hard for the “Two Wheels”.

With his determination and his love for the bicycle, Giovanni was able to make his dream come true. He made it possible to borrow whatever he needed to become part of the world of cycling. So at the age of seventeen, he began competing in the junior’s category. Giovanni’s dream soon became a reality and his passion began to bring him many victories. In 1947, after winning over sixty titles as an amateur, he became a member of the professional world of cycling. He was part of the professional cycling world until 1953, with five wins to his mention. With the end of this cycling career, the birth and realization of yet another of Giovanni’s passions arose, the PINARELLO (the bicycle).

The making of the Pinarello began in Catena di Villorba, towards the end of the 1940’s. The roots of Pinarello can be traced back to the beginning of WW II. This is when, at the age of fifteen, Giovanni began making bicycles at the factory of Paglianti. He continued making bicycles throughout his amateur cycling career. Bicycle manufacturing for the Pinarello family can be traced as far back as 1922, when Giovanni’s cousin Alessandro was already making bicycles in a small factory. The beginning of this manufacturing was signified with a gold medal and a diploma in his recognition, given at the prestigious Milan Bicycle Fair of 1925.

In 1952 an opportunity presented itself to Giovanni Pinarello as a direct result of a major disappointment in his cycling career. The opportunity was for him to become an integral part of the very beginning ot the manufacturing world of bicycles in Treviso. The disappointment was that he had to give up his first love and passion, bicycle racing .

In 1952, Giovanni was presented with the dilemma of having to give up the chance to participate in the very prestigious Giro d’Italia. He was to be replaced to make way for the up and coming new star, Pasqualino Fornara. Giovanni had no choice in the matter. 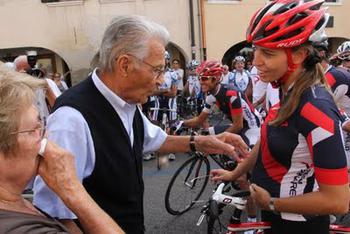 His sponsor, Bottecchia, offered him 100,000 Lire, a great deal of money for the times. That loss later became his fortune, career, and success, with the beginning and opening of the first and most renowned bicycle store in Treviso.

Pinarello was fortunate to be in a very economically prosperous area of Italy. This area was also synonymous with cycling and known for its manufacturing excellence. His intuition told him to take advantage of the opportunity that presented itself, and to be part of the world of team sponsorship. At first he began by helping to promote and advertise for small local teams. He also aided in the survival of the teams with whatever they needed to be able to participate in the competitive and expensive world of racing.

The first team to participate in a national competition with a Pinarello bicycle was la Padovani, in 1957. This marked the beginning of sponsoring many bicycle teams. Sponsorship was a very important and crucial vehicle in the recognition and promotion of the Pinarello name. It also helped to promote his bicycle store in Treviso.

In 1960 came the sponsoring of the first professional team, the Mainetti, which developed and produced many champion cyclists of the area. In 1966 the success of Guido de Rosso truly made a difference for Pinarello in the professional world of cycling. His victory in the Tour d’Avenir in France put the Treviso on the cycling map. This was the first international victory for Pinarello.

The first victory at the Giro d’Italia in 1975 by Fausto Bertoglio (Jolly Ceramica team), was another very important victory that boosted the fame and substance of the Pinarello reputation. After many years of team affiliations in the professional field, this was an instant and sensational result from the Jolly Ceramica team since their partnership only began in 1974. The final victory and other particular success at the Giro of 1975 were significant in putting the Pinarello name over the top. Until recently, Pinarello has never experienced such fame and notoriety. The name was now visible through the media having exposure through the television and began to be recognized for its exclusive artistic performance. The decade of the 80’s proved to be quite fruitful with many victories in the field of cycling.

In 1980 Pinarello affiliated itself with Inoxpran, the leader in the development of stainless steel (also known for its specialty kitchen accessories). Inoxpran was in part responsible for revitalizing the once victorious cycling athletes that made up the Jolly team. They began the season with very promising riders, and a very experienced team, captained by Giovanni Battaglin. For the first time since Pinarello had begun sponsoring various professional teams, the Pinarello logo was finally seen on the team jersey as an official sponsor, alongside Inoxpran. This team was one of an extremely competitive caliber, which right from its beginnings was victorious in many races of international status. 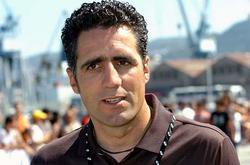 The year 1981 proved to be an extraordinary season for this power house of a team. Among its numerous victories, they captured two of the most distinguished international races, the Vuelta di Spagna and the Giro d’Italia.

Another enormous boost to Pinarello’s popularity came in the 1984 Olympics. A U.S. rider by the name of Alexi Grewal took home the gold medal on a Pinarello bicycle. Throughout the years the Pinarello victories continued, making it possible for many successful partnerships. One of these teams was Banesto, of which the Spanish champion Miguel Indurain was a team member, made the Pinarello the team bicycle.

Indurain was just an amateur then but would ride a Pinarello to victories at five Tour de France’s, two Giro d’Italia’s, an Olympic victory, a world time trial championship, an hour record, and many other international victories.
With the recognition obtained at the Giro d’Italia with Indurain in ‘92 and ‘93, and even with the victory of Chioccioli in ‘91, the victory that most stands out is the first Tour de France win in 1988 with Pedro Delgado of the Reynolds team (later called Banesto).

It was during Pinarello’s partnership with many professional teams that the Pinarello name became associated with many important Italian teams, such as the Del Tongo team from ‘88 to ‘91 and the Mercatone Uno team from ‘92 to ‘95. Among the many victories of the above mentioned partnerships, the one that remains the most important is the one formed in ‘91 with Chioccioli of the Del Tongo.

In addition to the long Tours, the numerous and extraordinary successes of Cipollini, the most internationally well-known “sprinter” have greatly contributed to the popularity of the Pinarello name and deserve to be remembered.

Cipollini has, together with Indurain, been a famous testimonial of Pinarello’s advertising compaigns. More recently, the success of the current teams, particularly Movistar and Sky, should be mentioned.

Pinarello frames have been ridden to victory in every imaginable type of race by riders as storied as Cipollini, Indurain, Riis, Zabel, Ullrich, Petacchi, Valverde, Pereiro and Wiggens. But it's not the Pinarello palmares that make it the most coveted frame brand on the planet.

"fanatical attention to perfection": has lead to Dyna Lite and Excell steel, then SC61.10a and V107 aluminum, AK61 magnesium, Torayca 65HM1K nano carbon fiber, integrated headsets, 1-1/8 inch steerers, Onda forks and stays, and now to exotically asymmetric frames in bikes which exceed our wildest expectations. Pinarello specializes in ground breaking designs the seduce us to wonder if it is about esthetics more than function. Riding a Pinarello informs us that it is about both.

"a great bicycle can be great without a great rider. A winning bicycle brings together the expert of the artisan, the latest in technological innovation, a passion for the sport, and a fanatical attention to perfection." -Fausto Pinarello 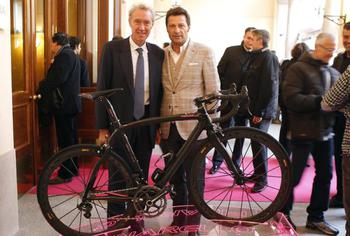