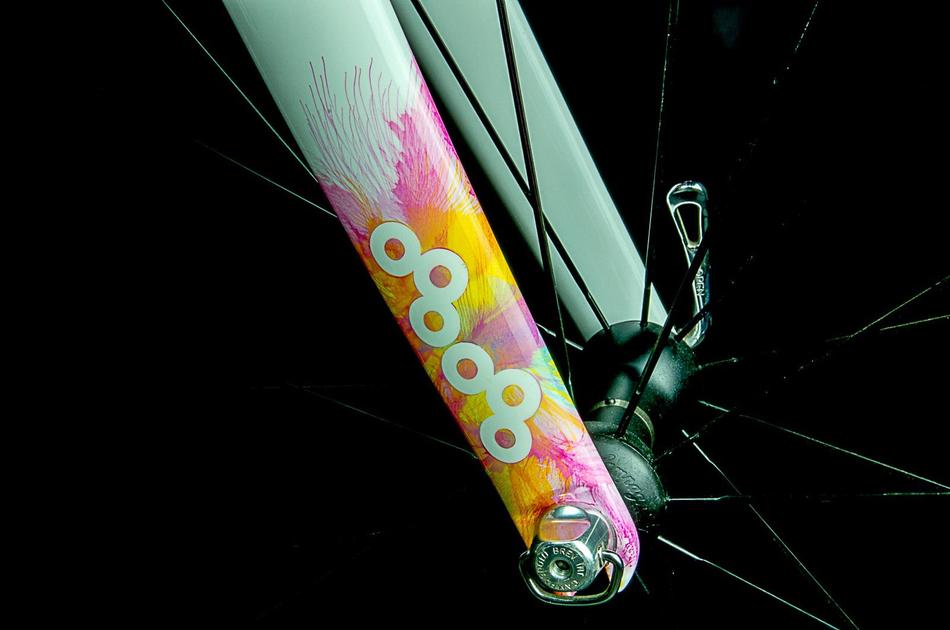 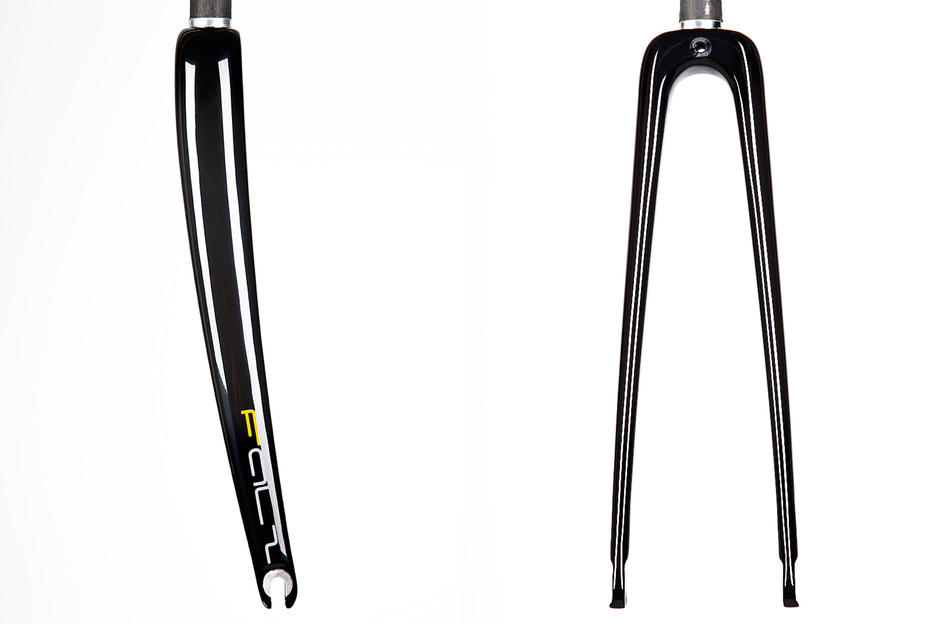 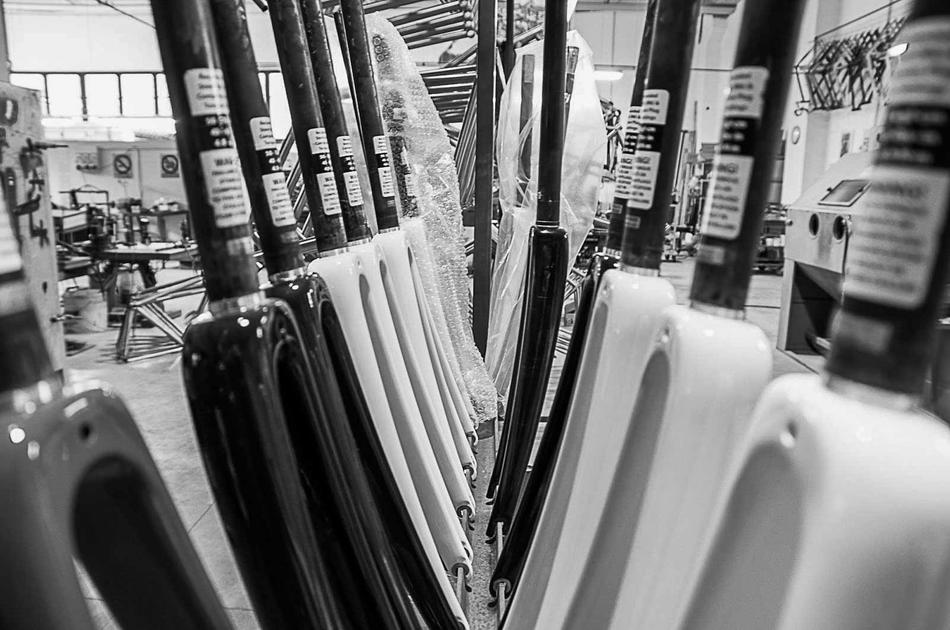 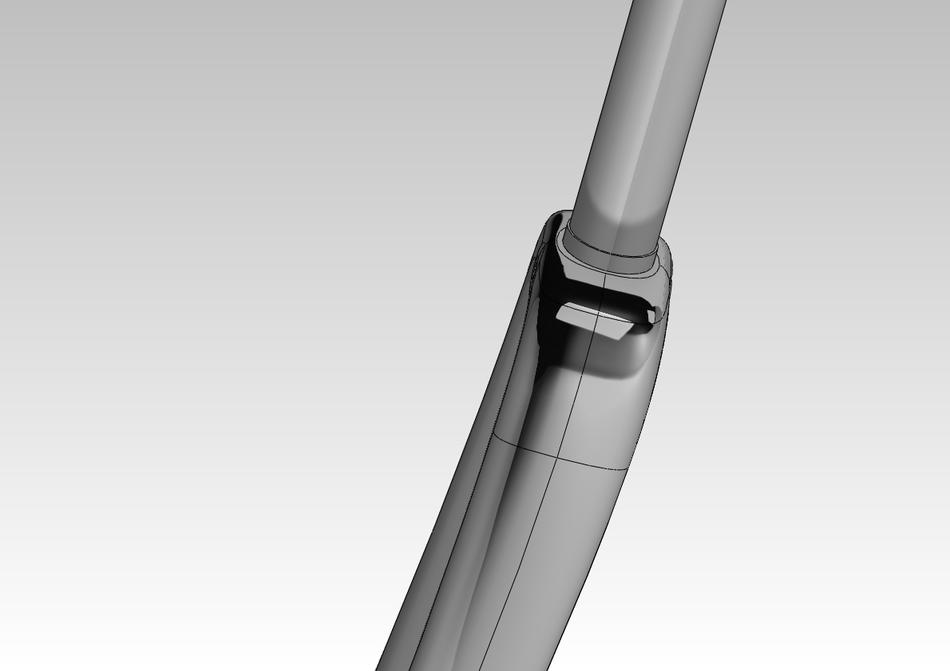 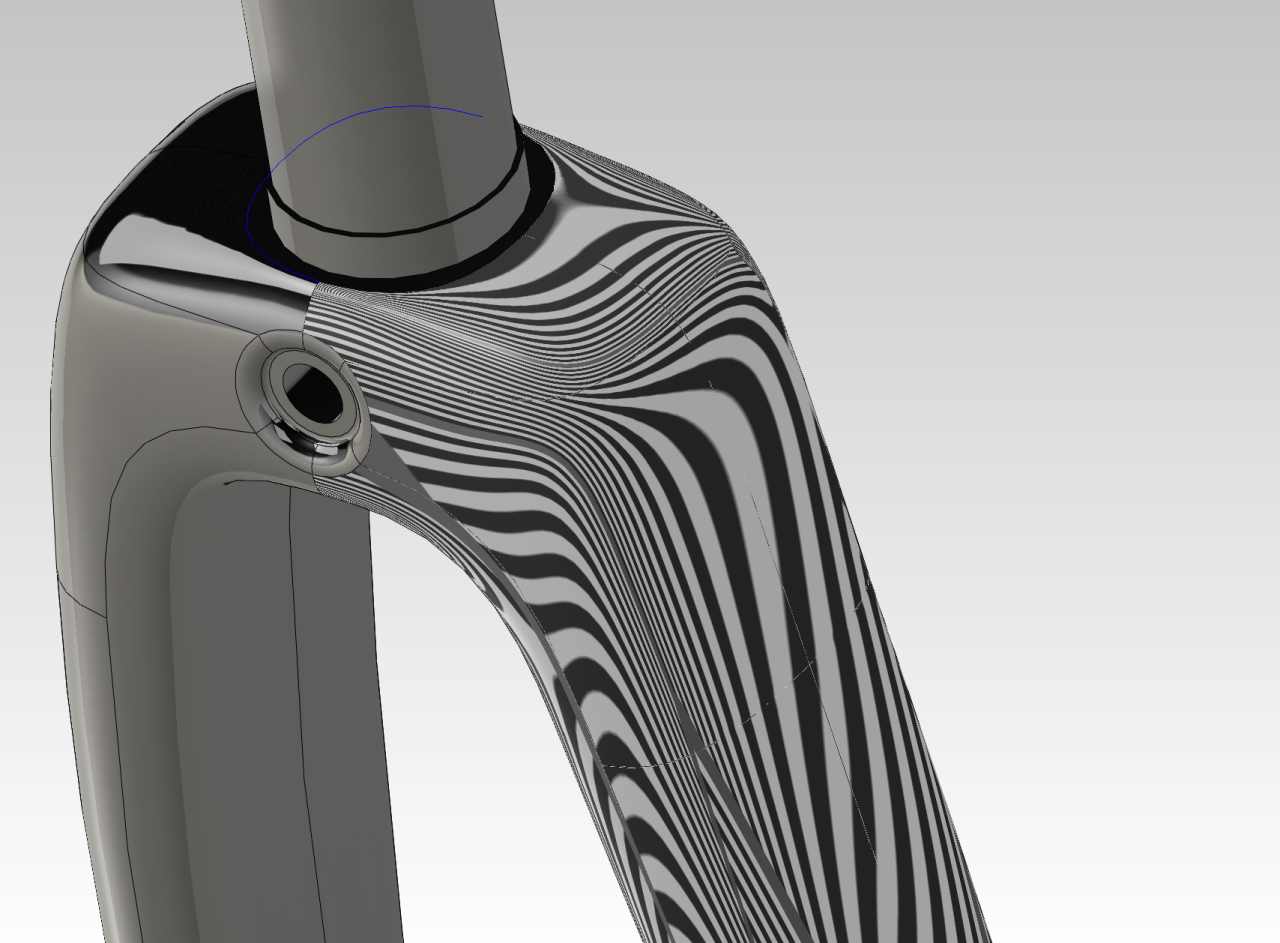 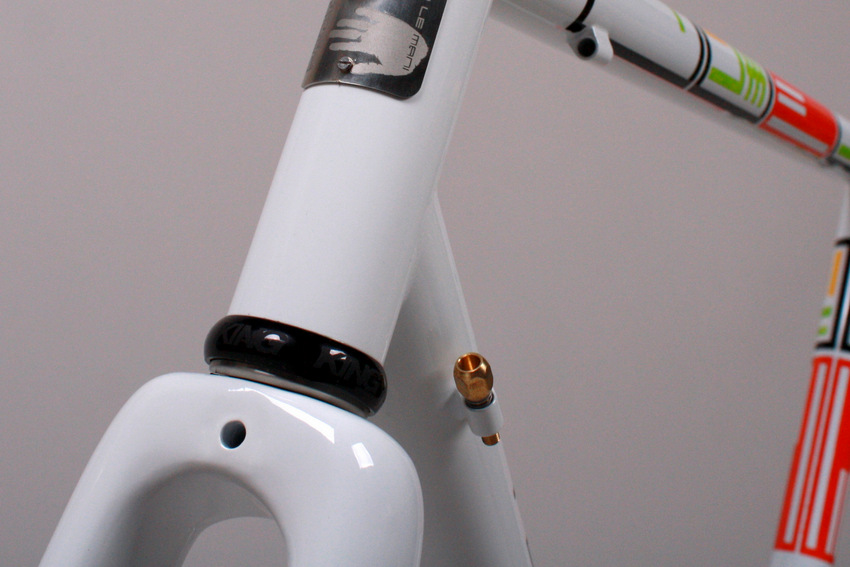 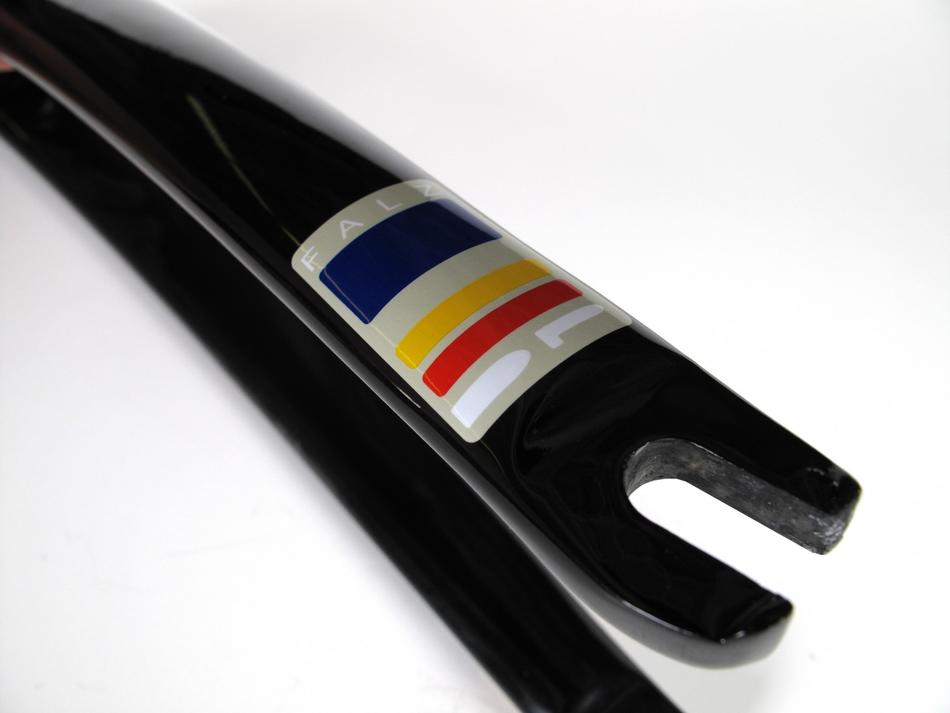 Dario Pegoretti has always been keen on wide diameter tubes to meet his performance and aesthetic goals.  Increased diameter means greater stiffness and control without sacrificing comfort or appearance.  Dario has seized on advances in metallurgy and has steadily increased the diameters of his tubing.In his most recent designs, the down tube diameter has grown so large that unacceptable manipulation became necessary to mate it to conventional head tubes.  Ovalizing is a cheap, sleazy way to solve the problem and works fine if you don't care about ride quality or aesthetics.  Other solutions are worse.

So, if your down tube won't fit the head tube, and larger diameter down tubes are the only acceptable path to your goal, you will just have to design a bigger head tube.  Dario designed his own head tube and worked with Chris King to develop a headset to match.

Yes, but a New Fork?

Ever wider down tubes, a new, wider head tube and a bespoke headset.  What is this all in aid of?  It isn't as though legions of dissatisfied Pegoretti owners were growling about their frame's performance.  True, in frames larger than 56cm there are improvements in front end rigidity, but most riders will be more likely to notice the improved look.  And, there were some unintentional side effects, like the fact that conventional carbon forks look pretty wimpy in this new home

Dario (along with the rest of us) is a fan of the wonderful Reynolds Ouzo Pro fork.  Well made, laterally stiff but vertically compliant and light weight with a wide range of available rakes, they set the standard for high quality aftermarket forks.  Dario spec'ed them on his frames as long as they stayed in production.

When Reynolds got out of the fork business, Dario went in search of a comparable solution.  Carbon frame builder Trigon makes a reasonably nice fork which ultimatly failed to live up to Dario's exacting standards.  ENVE forks are everything he was looking for (I am very happy with the one he put on my Marcelo), but are unavailable in rakes suitable for some of Dario's designs.

Unable to find an acceptable replacement, he designed his own.  The result is the Falz (sickle in the Italian dialect that Dario speaks).  "Falz" is representative of the shape of the new fork.   Dario has always found the aesthetics of tradional curved forks more to his taste than the straight bladed forks so common today.  His design starts with the traditional arc of the fork blades and continues with an updated flat-crown design.

Flat-crown forks give a little more compliant ride than sloping crowns as the fork legs are slightly longer allowing for better damping.  The crown also offers increased clearance for larger tires.  25 or even 28mm tires will easily fit the Falz.  The appearance of the massive flat-crown on the Falz fits well with oversized tubes whether tig-welded or lugged.

To match the stiffness of oversized tubing, the fork must have a high degree of lateral stiffness.  This is something Dario has found lacking in severl of the forks he has examined over the last few years.

The Falz was designed with more lateral stiffness than virtually any other fork while retaining the compliance derived from the flat-crown design.  This makes it the perfect match for the ride his steel frames are noted  for. One feature which has become increasingly common in the battle for lightness is the loss of a machinable fork crown.

The Falz has an aluminum cap on the crown which allows for precision machining for alignment of the headset crown race. Some other forks use carbon for this which cannot be machined as precisely and thus can reduce the precision and longevity of the headset. Other features include carbon fork tips and 1-1/8” carbon steerer in an extra-long length to allow use on the largest frames.

The appearance of the Falze has caused a bit of grumbling.  Standing alone, it's square-shaped crown and slowly tapered, flat sided legs are unique and startling.  Once you stick it in a D11 the large

diameter of head tube and headset take the edge off and result in an attractive statement in which every part benefits aesthetically from the effect of the whole.  Dario IS the master.

Once you get the Falz on the road it is clear that Dario has hit a home run.  The ride is well controlled and smooth under every circumstance.  It integrates perfectly with Dario's frames.  Our riders have chosen it as among the best forks for high speed and descending on the market.

The Falz fork serves to further complete and enhance Dario's offerings.  Good looking and functional, it is well mannered and comfortable and meets the most exacting standards for a performance fork on a steel (or alloy) race bike.  The Falze completely justifies the time and energy put into it's development and that of both the D11 head tube and head set.
The Falz forks weigh 524 grams and are available on most 2012 and 2013 vintage Pegoretti framesets.  The D11 system is only available starting with 2013 bikes.

Fatti con le mani.  If you are looking for a classic steel fork that incorporates state of the art technology, then Dario has the perfect solution.  The steerer tube is 1-1/8" by 330mm.  The rake is 4.5cm (to fit any Pegoretti frame except the Luigino).  They weight 902 grams.  The tubes and crowns are custom made and, so, very expensive:  $699.99 in white or black.  Worth the wait, the perfect accessory for your Big Leg Emma, Duende, Love #3, Marcelo or Responsorium. 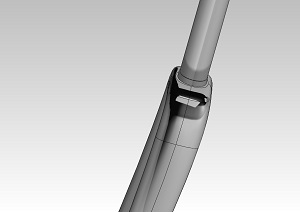 "In order to match the stiffness of oversized tubing, the fork must have a high degree of lateral stiffness. This is something I have found lacking in several of the works we have examined over the last few years. The Falz fork was designed with more lateral stiffness than virtually any other fork while retaining the compliance derived from the flat-crown design. This makes it the perfect match for the ride our steel frames are noted for. Our design starts with the traditional arc of the fork blades and continues with an updated flat-crown design. The entire pro 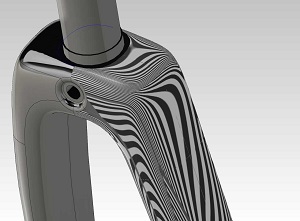 cess of concept and design was done in-house through evaluation of different models and solutions. The name Falz is taken from dialect for “scythe” as the side profile closely resembles that of this ancient tool. The crown resembles the design of flat-crown steel forks in order to increase the length of the fork blades and therefore the comfort. Particular attention has been paid to tire clearance. The Falz will accept tires of 25 mm width. The fork utilizes monocoque construction and is made of a single piece without gluing the sleeve to the dropouts."

The Falz fork is available in two versions – 45 mm and 50 mm rake and has a standard 1-1/8” steerer tube which will work with any standard headset of this size. It is available by request to the framebuilding trade. 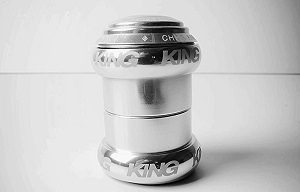 "Until the end of 2010 our frames accept a standard 1 1/8 headset. The diameter of the head tube for this standard varies from a minimum of 36 to a maximum of 36.5 mm for steel frames. This entailed a limit in terms of coupling with the down tube, as larger diameters of 36.5 requiring adapted shaped or ellipsoid down tube in the area of the joint. Using a 38mm diagonal coupling was rather difficult. At the end of 2010 we decided to increase the diameter of the head tube in order to obtain an optimal coupling in terms of milling and coupling with the head tube, what interested us was to be able to use a down tube free from crushed forms and adaptations as with the old diameter. We decided to raise this parameter up to 40.2mm, of course this has required the development of a dedicated headset. Chris King headset has produced a modified diameter and insertion depth set for this headtube and called it D11. The result is a reliable, strong and perfectly round joint. During the development of the headset and the resulting head tube we have decided to increase the diameter of the down tube which now stands at 39mm in diameter. The new headset design a continue to use the proven bearings and components of King's standard headsets, but the cups have a larger diameter skirt where they are pressed into the head tube. Also this skirt is longer than the standard giving better support to the head tube. The shape of the cups Has Been modified to flow better with steel and / or titanium frames. This headset works equally well with the Falz fork and other 1-1/8” forks as the bearing sizes have not been changed. It features Chris King’s Grip-Lock fastening system as well as King’s 10-year warranty. (thanks Nelson for the help) D11 headset is available in black or silver anodized colors. (thanks to Darren Crisp for the photo)"