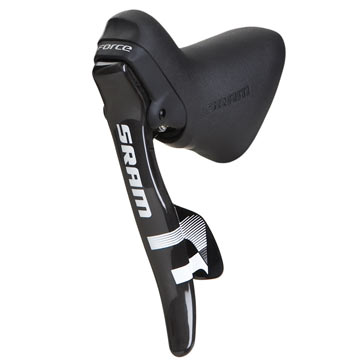 SRAM's Force DoubleTap Control Levers set the standard in road bike shifting. Because you're able to shift from the hoods, drops, and even when sprinting, Force levers offer a competitive advantage that can't be touched. They're crafted with carbon and magnesium to create a system so light that it won't slow you down whether you're racing for prizes, bragging rights or World Championships. Plus, the single-lever-shifting design allows for faster, smoother shifts while being completely independent of the brake levers, eliminating the possibility of braking when you shift. These levers let you fully hide the cables, too. 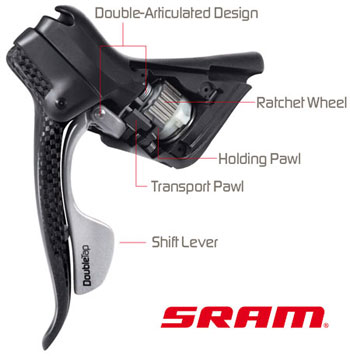 The keystone to SRAM's revolutionary road groups is their proprietary DoubleTap shifter technology, which lets you shift up and down from nearly any position on the bars with a solitary lever. Short, rapid taps of the shift lever cause the transport pawl to move the ratchet wheel down through the shifting range (putting you in a harder gear in the rear), while a long sweep of the lever allows the holding pawl to leapfrog over the transport pawl (putting you in an easier gear in the rear). The DoubleTap system also boasts superior ergonomics in lever sweep. Instead of moving straight in and out, the lever moves inwards at a 15-degree angle, following more closely the natural movement of your hand. And, the double-articulated design separates the brake and shift levers, which allows them to move separately, making braking and shifting at the same time easier than ever. You can even keep the shift lever pinned to the bar, perfect for lightning-quick shifts during blazing-fast finishing sprints.