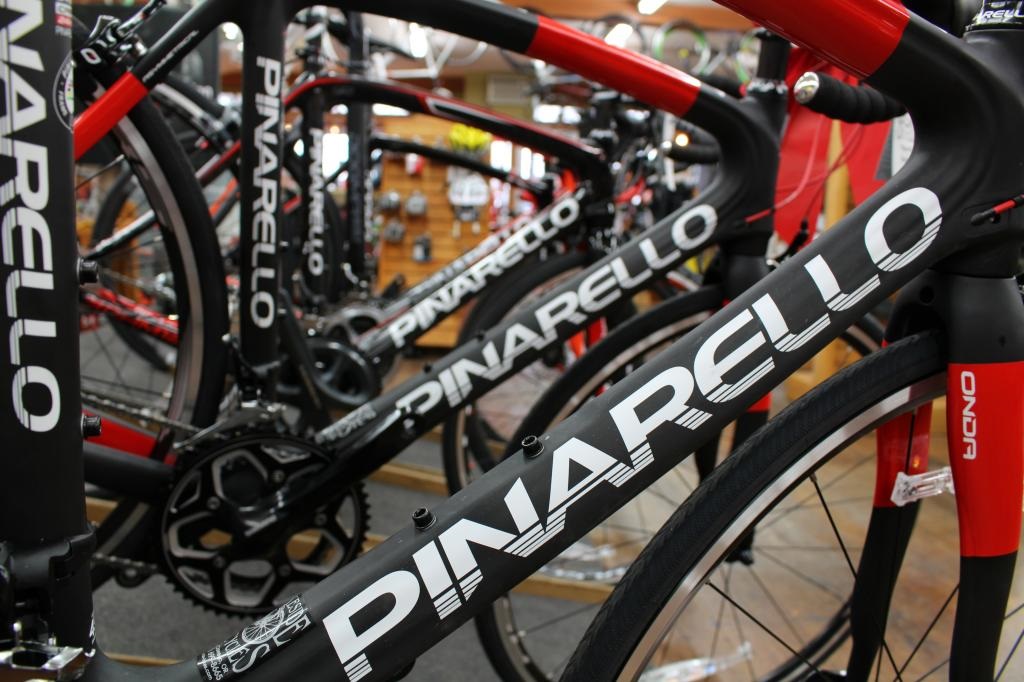 Pinarello Comments
The History of Pinarello GIOVANNI PINARELLO, the eighth of twelve brothers, was born in Catena di Villorba in 1922. He was born at a time when life could be rather difficult, which was not uncommon, for many families ot the humble, and peasant backgrounds, in the rural farming areas of Veneto. The struggles of a simple farming life, as well as surviving the hardships of both World Wars, greatly effected and influenced the life of Giovanni Pinarello and his family. His impoverished and simple upbringing was not able to extinguish a passion Giovanni discovered he hard for the “Two Wheels”. With his determination and his love for the bicycle, Giovanni was able to make his dream come true. He made it possible to borrow whatever he needed to become part of the world of cycling. So at the age of seventeen, he began competing in the junior’s category. Giovanni’s dream soon became a reality and his passion began to bring him many victories. In 1947, after winning over sixty titles as an amateur, he became a member of the professional world of cycling. He was part of the professional cycling world until 1953, with five wins to his mention. With the end of this cycling career, the birth and realization of yet another of Giovanni’s passions arose, the PINARELLO (the bicycle). The making of the Pinarello began in Catena di Villorba, towards the end of the 1940’s. The roots of Pinarello can be traced back to the beginning of WW II. This is when, at the age of fifteen, Giovanni began making bicycles at the factory of Paglianti. He continued making bicycles throughout his amateur cycling career. Bicycle manufacturing for the Pinarello family can be traced as far back as 1922, when Giovanni’s cousin Alessandro was already making bicycles in a small factory. The beginning of this manufacturing was signified with a gold medal and a diploma in his recognition, given at the prestigious Milan Bicycle Fair of 1925. In 1952 an opportunity presented itself to Giovanni Pinarello as a direct result of a major disappointment in his cycling career. The opportunity was for him to become an integral part of the very beginning ot the manufacturing world of bicycles in Treviso. The disappointment was that he had to give up his first love and passion, bicycle racing . In 1952, Giovanni was presented with the dilemma of having to give up the chance to participate in the very prestigious Giro d’Italia. He was to be replaced to make way for the up and coming new star, Pasqualino Fornara. Giovanni had no choice in the matter. His sponsor, Bottecchia, offered him 100,000 Lire, a great deal of money for the times. That loss later became his fortune, career, and success, with the beginning and opening of the first and most renowned bicycle store in Treviso. Pinarello was fortunate to be in a very economically prosperous area of Italy. This area was also synonymous with cycling and known for its manufacturing excellence. His intuition told him to take advantage of the opportunity that presented itself, and to be part of the world of team sponsorship. At first he began by helping to promote and advertise for small local teams. He also aided in the survival of the teams with whatever they needed to be able to participate in the competitive and expensive world of racing. The first team to participate in a national competition with a Pinarello bicycle was la Padovani, in 1957. This marked the beginning of sponsoring many bicycle teams. Sponsorship was a very important and crucial vehicle in the recognition and promotion of the Pinarello name. It also helped to promote his bicycle store in Treviso. In 1960 came the sponsoring of the first professional team, the Mainetti, which developed and produced many champion cyclists of the area. In 1966 the success of Guido de Rosso truly made a difference for Pinarello in the professional world of cycling. His victory in the Tour d’Avenir in France put the Treviso on the cycling map. This was the first international victory for Pinarello. The first victory at the Giro d’Italia in 1975 by Fausto Bertoglio (Jolly Ceramica team), was another very important victory that boosted the fame and substance of the Pinarello reputation. After many years of team affiliations in the professional field, this was an instant and sensational result from the Jolly Ceramica team since their partnership only began in 1974. The final victory and other particular success at the Giro of 1975 were significant in putting the Pinarello name over the top. Until recently, Pinarello has never experienced such fame and notoriety. The name was now visible through the media having exposure through the television and began to be recognized for its exclusive artistic performance. The decade of the 80’s proved to be quite fruitful with many victories in the field of cycling.

The Mecurio is definitely an extraordinary Hybrid bicycle! The Mercury Carbon is a new concept in cycling. Fast and agile with disc brakes: perfect for the city, but it can also become a road bike thanks to its lightness and versatility!

Based on the aluminum Trionfo, the Mercurio features a full carbon, asymmetrical frame that's based on the original Dogma design. Pinarello describes this design as an "asymmetry that creates more symmetry," and its effect on the ride can range from “unnoticeable” to requiring a “slight adjustment” depending on rider sensitivity.

The Mercurio is intended to satisfy a range of cyclists looking for something that has the sleekness and performance of a traditional road bike, while also exhibiting the comfort of a "super-hydrid" or "city" bike. Like the Trionfo, the Mercurio comes equipped with Shimano Sora components, but with Shimano mechanical disc brakes and traditional drop bars.

The carbon Mercurio is available in the 943 (Black/White/Red gloss) color in four sizes for $1,995.  The flat bar, aluminum  Trionfo is available in the same geometry in the 938 (Black/Yellow matte color) for $1,400.  If you have any questions, please contact the Pinarello experts of Lakeside Bicycles at 503-699-8665 or by e-mail at Info@Lakeside.Bike. 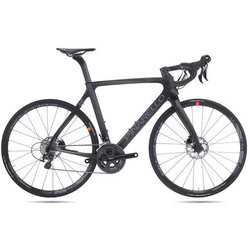 Pinarello Gan K Disk
$4,000.00
Pinarello's Gan K Disk is born from the Gan family, mixing racing with comfort. Materials and tubings are borrowed from the Gan, ensuring high performances in every ride. The geometry and FlexStays increase comfort, especially on long and rough rides. Made from T600 Carbon, the Gan K Disk produces the same plush ride the pro experiences aboard a Pinarello. All the requirements of a high-end frame are here, fast aero tubing, internal cable routing for mechanical and electronic drivetrains, and an integrated, tapered head tube. And of course, the Pinarello feel and styling. Something that can't be qualified really, you just have to ride one for yourself. Once you do, you'll know. This build includes a Shimano hydraulic braking system for increased braking power and performance, a slick-shifting Shimano Ultegra groupset, Fulcrum wheels, and legit MOst components. All this adds up to a ride with comfort, style and value. 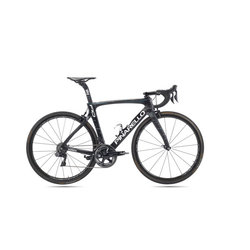 If you spent any time watching Chris Froome and Team Sky winning the Tour d' France or the Vuelta d' Espana this year, then you are familiar with the Pinarello Dogma F10. With the exception of the harshest cobbled Classics, where the Pinarello K8 is the extraordinarily compliant bike of choice, Pinarello and Team Sky have rejected the current trend of using specialty bikes to suit each stage profile, they have opted for an all-in-one approach. This frame was designed to provide you and Chris Froome a general level of high performance, comfort and durability. The Pinarello Dogma F10 is a darn good bike!

And the numbers support this. The Dogma F10 is 6.3 percent lighter and seven percent stiffer than it's award winning predecessor the F8. The Dogma F10 features a concave downtube design, reducing drag by 12.6 percent and a new fork which contributes another ten percent reduction in drag.

Made from Torayca T1100 1K carbon fibre, the highest tensile strength in the cycling world, all the frame shapes have been updated, improved and strengthened as has the new Onda F10 fork which borrows the dropout fin design from the Bolide time trial bike.

Pinarello has optimized the entire frame for aero efficiency, going so far as to design a bespoke carbon bar-stem, seatpost and Twin Force integrated seat collar for the Dogma F10. Even the design of the saddle was kept in-house.

Despite these changes Pinarello refers to the Dogma F10 as an evolution rather than a revolution. The Dogma F8's geometry remains unchanged as, for the most part, has the rear triangle which was already particularly nice in the Dogma F. The seatstay junction is made using a single merged piece of carbon fibre, which only splits close to the rear wheel and allows for clearance of up to 28c tires. The Pinarello Dogma F10 is designed with internal cable routings for either mechanical or